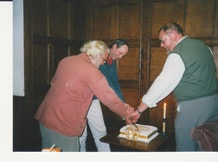 This picture of BMEMF's 'Founding Fathers' was taken at Kinnersley Castle on the occasion of the 25th anniversary of BMEMF. Geoff is on the right, in the centre is Alan Crumpler and on the left is Grayston Burgess (known as Don).

​We were very sorry to learn that Geoff Warren, one of the 'Founding Fathers' of BMEMF, recently died. We are very grateful to Geoff's family for the generous donation they made to BMEMF following his funeral. This page celebrates the contribution he made to BMEMF and to the wider early music community: if you have any memories you would like to share, please email them to the webmaster.
I am very sorry to hear of Geoff’s death as he was the person who contacted me about founding BMEMF. He had sung in my Choir The Britten Singers, in the early days when I started it in 1975 and was a valuable bass. I was at the first meeting at Don Burgess’s house  and served on the Committee with both Geoff and Alan. I remember discussions about what the new society was to be called with Geoff having some quirky ideas. He was always a great supporter of Early Music making in the area and will be much missed. ​Pamela White

When I was Newsletter Editor, Geoff regularly sent me articles under the nom-de-plume 'The Old Git'. His dry wit masked considerable knowledge, and his articles were as informative as they were entertaining. ​Sue Russell

It was back in 2015 that Geoff suggested that he and I should investigate the Hereford Cathedral archives for manuscripts of William Felton’s music. Felton, 1713-1769, was a Vicar Choral, and towards the end of his life the Custos of Vicars at Hereford.  A proficient harpsichord player, he composed a number of organ concertos as well as songs and glees. In Felton’s lifetime the concertos were highly thought of but were not outstanding enough to survive the test of time.  However, Geoff had heard of them and thought they might be worth reviving.  We contacted the Cathedral Archivist, Dr Rosemary Firman, and spent some time with her exploring the archives.  We were a bit disappointed not to find any manuscripts in Felton’s own hand, but there were the parts for organ or harpsichord, oboes and violins of the six organ concertos of his Opus 1 in 19th century copies.  Geoff got permission for these to be photographed at BMEMF’s expense so that I could produce a conductor’s score from them.  When we arranged a workshop day to try out five of the concertos David Hatcher conducted using this score, while all the musicians played from a reproduction of their manuscript part.  Before this workshop, held at St Peter’s Church, Lugwardine, on October 10th 2015, David practised the pieces with the Titley Philharmonic Orchestra, and on the day five different organists played a concerto each, accompanied by members of the ‘Titley Phil’ and other oboeists and violinists who attended the workshop.
Unfortunately Geoff was not able to attend that day, which we were both disappointed about, but he was present when Felton’s Concerto no. 6 in B flat major was performed at the College Hall, Hereford Cathedral the following spring by organist Charles Maxtone-Smith and the Titley Philharmonic orchestra, conducted by David Hatcher.  The occasion was to mark the refurbishment of a portrait of William Felton, and was part of a concert organised by the Dean of Hereford, Michael Tavinor.  I think Geoff and I were both quite proud to have made it possible, but it was all Geoff’s idea! Fran Johnstone