George Parris was our tutor in 'A Brace of Bachs'. Singers and instrumentalists revelled in the demanding but immensely rewarding music. John & Georgia Wren hosted the event at their beautiful home.

Ali Kinder was the perfect tutor to lead us in an exploration of three suites by Schein: her warm good nature, huge enthusiasm and ability to communicate made it a perfect day.

Andrew Kirkman led us expertly and entertainingly through works by composers at the court of François I of France - Brumel, Lheritier, Richafort and Gascogne.  Gascogne's music was particularly striking, and, although tricky, very satisfying to sing.

Rory McCleery, Director of the Marian Consort, led a hugely enjoyable workshop for singers, exploring pieces from the Dow partbooks.

Tudor music representing bells, hackney carriages and street cries were some of the pieces instrumentalists tackled under the direction of tutor Mary Tyers. Singing and playing simultaneously was a new skill for many of the participants!

The magnificent fourteenth-century church was the venue for our first in-person workshop since lockdown restrictions eased. David Allinson's direction was, as ever, superlative, and the 'deceptively simple' music he chose was both rewarding and beautiful to sing.

Members enjoyed an excellent start to the new year, with Paul Spicer leading a terrific workshop on Buxtehude's 'Membra Jesu Nostri', and Ephiphany motets by Palestrina and Eybler.

​Ali Kinder led a day of music, dancing and lots of laughter when she and her colleagues Anne Deller and Kath Waters from Apollo's Revels tutored a day for instrumentalists and dancers at the Dance Centre in Llandrindod Wells.

​Perfect sunshine, a superb venue and music by Gabrieli, Monteverdi and Schütz made for a memorable workshop with tutor Steve Marshall at Clytha House.

David Allinson led singers in an intensive but exhilarating study of 17th century Portuguese polyphony. This was a joint BMEMF/SWEMF event.

Tutor Lizzie Gutteridge led a 'Magic of the Medieval' day for singers and instrumentalists. In the evening she gave a fascinating recital.  All this and a splendid dinner in between.

A happy day singing Iberian polyphony in the beautiful setting of the Bishop's Palace in Hereford.  Will Dawes was an excellent tutor.​

Julia Bishop was an expert and engaging tutor for our special workshop where players of modern stringed instruments had the chance to explore Baroque techniques.

Our tutor, Emma Gibbins, led singers ably through a menagerie of Tudor pieces on the theme of beasts and birds. She also played for us on the church's fine Father Willis organ, with its splendidly dragon-decorated pipes.

The first workshop of the incipient Wales Early Music Forum Cymru was a great success.  Tutor David Hatcher led singers and instrumentalists through Tudor music by Cornysh, Tallis, Taverner and Tye, and the standard of singing and playing was impressive.  ​

A very informative and enjoyable day with tutor Dr. Peter Leech at Lydbury North village hall.  It was fascinating to hear how Maria Rosa Coccia wrote a four part motet as a counterpoint exercise.

A lively and enjoyable day of Venetian music at Burton Court with tutor Gawain Glenton.  Lots of instruments - we even had a lizard.  As one participant commented, "It was great to experience the skilful way in which Gawain made use of the wide range of instruments and singers available. No-one had to feel surplus to requirements!"

Tutor David Skinner led singers through works by Brumel, Févin, Josquin and Mouton, all found in a 16th century songbook possibly prepared for Anne Boleyn. David has researched the songbook and written the introductory study to the facsimile edition, and has recorded the music with his vocal consort Alamire.

David Hatcher led a record number of singers and instrumentalists working on Music for Lent from the New World.

Music for Advent and Christmas was the theme when the renowned singer and tutor Patrick Craig led a large group of singers for a day of glorious singing, hard work and plenty of good humour.

I​n October the celebrated conductor and tutor Justin Doyle led a day for instrumentalists and singers on music by Lotti. As an added bonus, we were guests at the beautiful home of John and Georgia Wren. 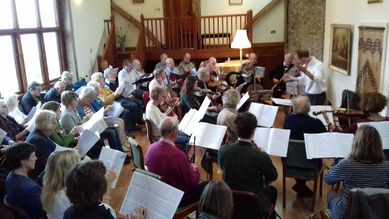 Peter Syrus, so knowledgeable on the music of Josquin and his contemporaries, led instrumentalists and singers in an informative, occasionally challenging, but very rewarding workshop.

Tutors Kate Semmens and Steven Devine gave instrumentalists and singers a laughter-filled day of music from the Pleasure Gardens.

Peter Leech gave singers an exuberant and exceptionally knowledgeable introduction to choral music of 18th century Rome. Here is a link to his group performing some of the music in the place where it would originally have been performed: https://youtu.be/9RbNnS7I3X

Ricardo Barros guided instrumentalists and dancers through some of the intricacies of baroque dance.

Justin Doyle led a day for instrumentalists and singers, working on choruses from Handel's oratorios.

Andrew Collis led a day for string and recorder players, discovering the music of Schein and Scheidt.

Tutor Graham Coatman introduced singers to works from the Capilla Flamenca, the Flemish Chapel in the Royal Spanish Court. 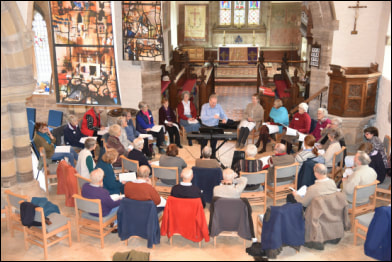 Justin Doyle led a workshop for singers and instrumentalists on Monterverdi's sacred and secular music. (We take our afternoon tea-break very seriously).

Grange Court, Leominster: March 2015
Sally Dunkley led a workshop for singers on settings of the Song of Songs.

Stockenny: June 2014
Steven Devine and Kate Semmens led a workshop intriguingly titled 'The Secrets of our Hearts', and followed it with a ravishing recital in the evening.

Jeffrey Skidmore, founder of Ex Cathedra, led a day working on Brazilian Baroque. Our venue was the historic Grange Court in Leominster. 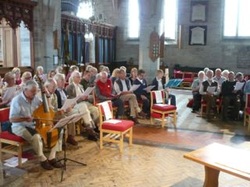 Over 100 members of BMEMF and local choral societies and choirs gathered to study Spem in Alium. It was a superb day, and the excitement and satisfaction at what we achieved was palpable. 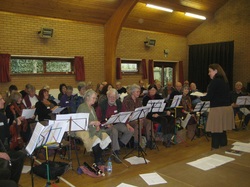 The York Waits led a workshop on West Gallery music in New Radnor. In the evening they gave a concert. 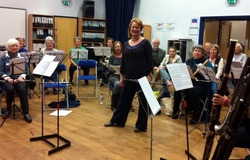 'Music for the Royal Fireworks': tutor Ruth Watson led a workshop for woodwind and brass at the Hereford 6th Form College. 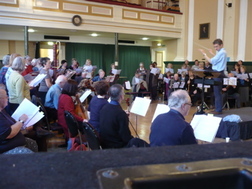 Tutor Robert Hollingworth at a workshop for singers and instrumentalists at Kidderminster in November 2011. This was part an unforgettable day studying Missa Ecco si Beato Giorno by Striggio.

This picture gives some idea of the huge interior of the Town Hall in Kidderminster where the Striggio workshop took place. 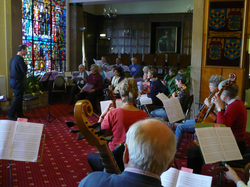 Tutor David Hatcher working with the instrumentalists separately as part of the Striggio workshop. 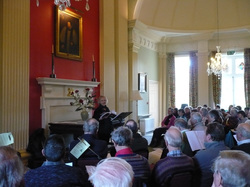 Sally Dunkley was an inspired and inspiring tutor for our Spring workshop studying works by White, Parsons and Byrd. 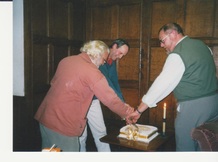 This picture of BMEMF's 'Founding Fathers' was taken at Kinnersley Castle on the occasion of the 25th anniversary of BMEMF. From left to right: Grayston Burgess, (known to us as Don, his first name), Alan Crumpler and Geoff Warren. Passamezzo did some dances and involved the assembly in a Farandole.