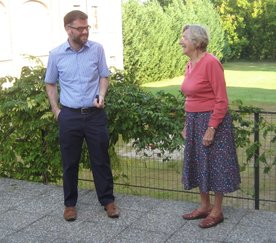 In October 2015 we lost our dear friend Hannah Davies. BMEMF's existence is due in no small part to Hannah. Here are some memories shared by BMEMF members.


​Pictured left: Hannah with David Allinson in Giarole, 2015
From Annette Bilson: How totally shocked and saddened I am to learn of Hannah's passing.  How we will all miss our delightful friend.  I was first taken under Hannah's protective wing as a new girl at Hereford Choral Society many years ago.  I was rather in awe of the 'formidable' conductor but with Hannah sitting next to me and her encouragement I soon settled.  Within weeks though she had steered me into BMEMF which again has brought me so much enjoyment. I am grateful to dear Hannah for her caring attentive ear during other difficult times and will truly miss her.

From Dinah Penman, MEMF member: I was so shocked and upset to hear of Hannah's death. She was such a force, up for all sorts of challenges, and, I know, so central to BMEMF. She and I went to many workshops together, and she was always a delight to be with and great company.

From Sara Clymo on behalf of MEMF: many of our members are saddened to hear of Hannah's death. Anyone who has been to a BMEMF workshop will have been the recipient of her happy and welcoming smile as she always made a point of greeting strangers. She complained that she couldn't remember names, but she never forgot a face. How we will miss her.

From Mary Tolhurst: Hannah was an extraordinary person - thoughtful, kind, warm, loving and a dear friend.   She was a tireless ambassador for early music in general, but especially for BMEMF, to which she had belonged since the early 1980s and steered through any ups and downs with her usual grace. I had the good fortune to serve on the Council with her on two separate stints (both covering several years) and  I think she had taken almost every role, from non-specific 'member' to Chair. On her second retirement from the Council she was awarded Honorary Life Membership in recognition of her services and achievement within BMEMF which she accepted with some surprise, as she had not really grasped how important her work and influence had been.

From Helen Keef: Having known Hannah and sung with her and taken part in different projects with her, I can only say what a wonderful person she was. She invited me and my friend Stella Sims to be part of BMEMF - she invited me to sing with her 'chosen few' in Italy and she continued to be a wonderful companion in the BMEMF world. I can't believe it's time to say goodbye. Goodbye my friend and special musician.

From Ann Bull: What a shock, and enormous sadness. It seems hard to believe Hannah has been taken from us all so suddenly and prematurely, and so devastating for her husband and family. I learnt of the existence of BMEMF from Hannah at a Hereford Choral Society practice and have been grateful ever since for her welcoming and kindly urging to come and join. So knowledgeable, and knowledge worn so lightly, so enthusiastic, so friendly  - a really wonderful person. It doesn’t need saying that Hannah would want BMEMF to carry on and flourish, but it is indeed hard to imagine it without her. I do send all of you who knew her best my very best wishes in going forward.

From Tish Jack: I just have an abiding memory of how friendly and welcoming and good with people she always was.  I'm very sad.​

From Grayston Burgess: Hannah was one of my dearest friends. She was a loving, loyal friend,
not only to me but to BMEMF itself for which she worked constantly and tirelessly.  Her enthusiasm and winning smile were hard to resist and her unwavering dedication to early music seemed to carry her along effortlessly whatever the difficulties.  We all owe her a debt of gratitude for her constancy and love.  I shall miss her dreadfully. (To read Grayston's article about the early years of BMEMF and the part played by Hannah, click here.)

From David Allinson: I am so glad that I knew Hannah – such a life-affirming, open and creative person who had the knack of combining people in social and musical concord ... she made things happen.

From Wendy Sladen: Many will attest to Hannah’s love of early music, her work for BMEMF, including  keeping it afloat when it was foundering way back, and so on. The particular memory  that I cherish is of how she recruited me! This was one of Hannah’s very best skills – finding people who might fulfil a particular role at the time or in the future, and persuading them into it. Concerning BMEMF she had worked tirelessly for many years and she was still the Chairman when I got the phone call – “might I think about joining the BMEMF Council?”.  I demurred but who could resist that quiet, oh-so-gentle query and obvious sadness if it was turned down? I did join and am still ‘on board’.  Hard work but satisfying. Thank you, Hannah.

From Richard Silk: We were sadly occasional participants in BMEMF events but greatly admired all that Hannah achieved.  Our other connection with Hannah concerns our local chamber choir in Church Stretton, The More Singers; this group was founded in 1973 to sing at a special church event and Hannah was one of the founding members.  I conducted it for twelve years and it is still going strong.  Hannah came to the concerts whenever she could.